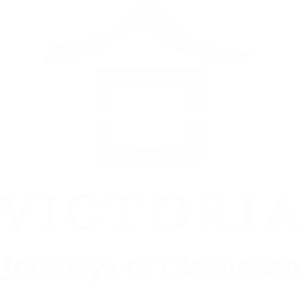 In Part 1, we talked about ways to improve your photography of the vibrant Chau Doc Floating Market. Our tips included moving about the boat in search of the best angles, framing your shots using the Rule of Thirds, and seeking out backgrounds that complement instead of overpower your subject. This post will add four more tips to think about as you navigate the watery, wonderful world that is the Chau Doc Floating Market.

Check your shutter speed to freeze the moment

Photographing the floating market can be tricky in that the scenes are often made up of many moving parts. Some of the boats may be moving and your own boat will most likely also be moving. When they’re moving in opposite directions, that can make it difficult to take action shots that come out clear. Here’s where shutter speed comes into play.

But to take clear photos of moving objects, you’ll likely need a faster shutter speed to “freeze” the action. If you’re using a DSLR camera, this means you’ll also need more light and a larger aperture. If using a point-and-shoot camera, look for the “Sports” setting which is designed to capture movement. 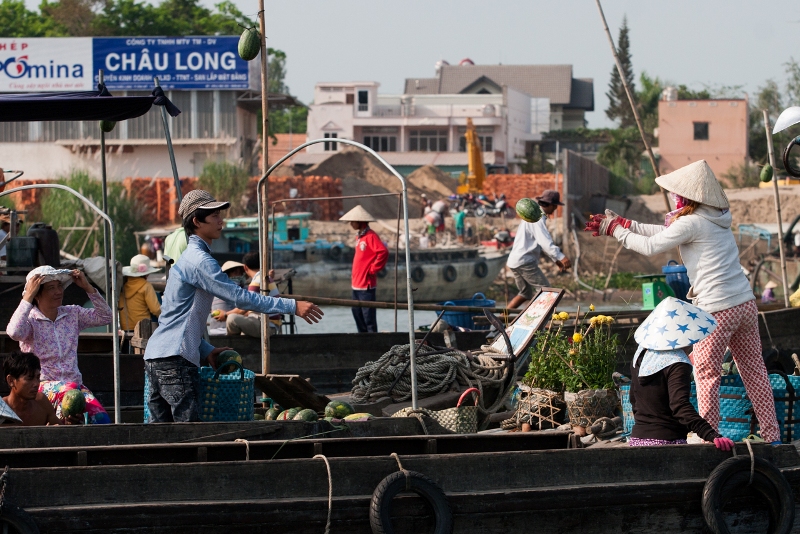 In this example, the shutter speed was set to 1/1000 second, “freezing” the watermelon in mid-air with the rest of the elements in the image also being clear.

You’ll likely need to play around with the shutter speed to find one that works for the type of action you want to capture — faster to freeze a scene, slower to blur the action, like the wake behind a boat. Start off with a speed of about 1/125 sec and go from there. You may need to change that depending on how far you are from the subject and the lighting conditions (if it’s early morning with less light, you may have to take the shutter speed higher.) Be ready to compensate by adjusting the ISO or the aperture.

War photographer Robert Capa famously said: “If your photographs aren’t good enough, you’re not close enough.” What he was encouraging was getting right up close to your subject to capture the gritty details. While that’s generally great advice, it’s not always possible, especially in the scenario most of us find ourselves when visiting the Chau Doc Floating Market.

Visitors need to keep in mind that this is a bustling place of business, and while the buyers and sellers are usually very accommodating and good-natured, tourist boats can’t approach too close to the action, especially when the market is at its busiest peak.

This is where a good zoom lens comes into play, allowing you to frame your shot so that there’s not a lot of water between you and the subject. 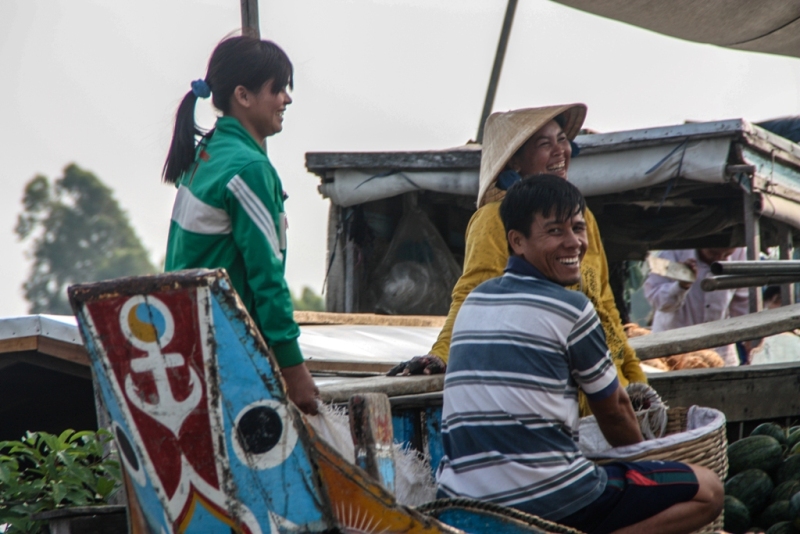 I love this photo, capturing an inside conversation where the man just happens to have turned around mid-laugh. We were quite a distance away and they definitely weren’t laughing at anything we said or did. A zoom lens allowed me to fill the frame with this group of friends.

Many of the barges double as houses, and its residents are perfectly at ease to do whatever it is they normally do at home. The small size of the boats means that they’re typically doing it in the open, though. 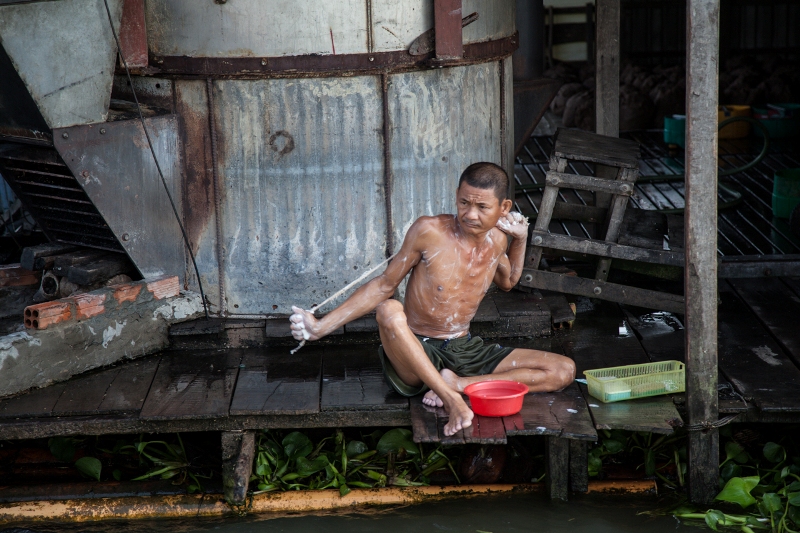 With a zoom lens, we were able to capture this man, unperturbed in his bathing rituals. I love the simplicity of the shot and the sheet metal provides a nice backdrop while the dark wood and hodgepodge of items to the right add a touch of gritty reality to the image.

Don’t miss out on the details

Because the Floating Market is mainly a place for commerce, it’s tempting to just focus on the buying and selling that goes on. However, there’s so much else happening on these boats that often house entire families, including children and pets. 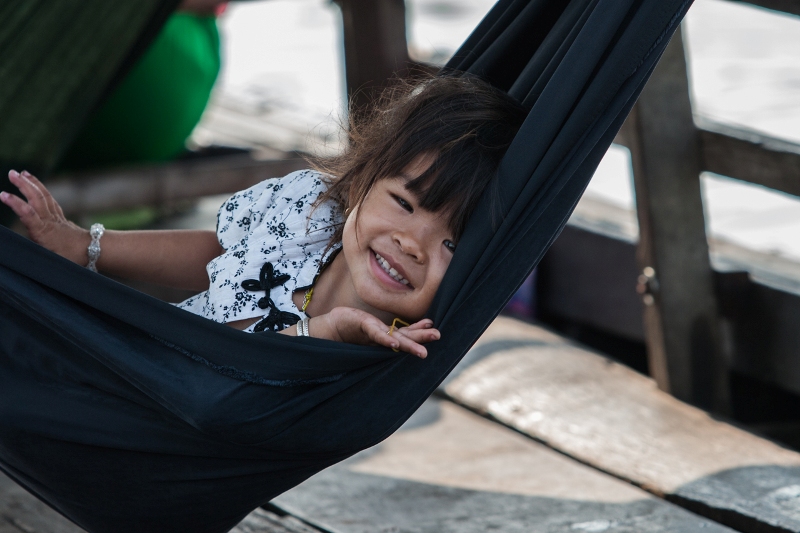 This adorable little girl was just lazing in the background as her parents were working the market. 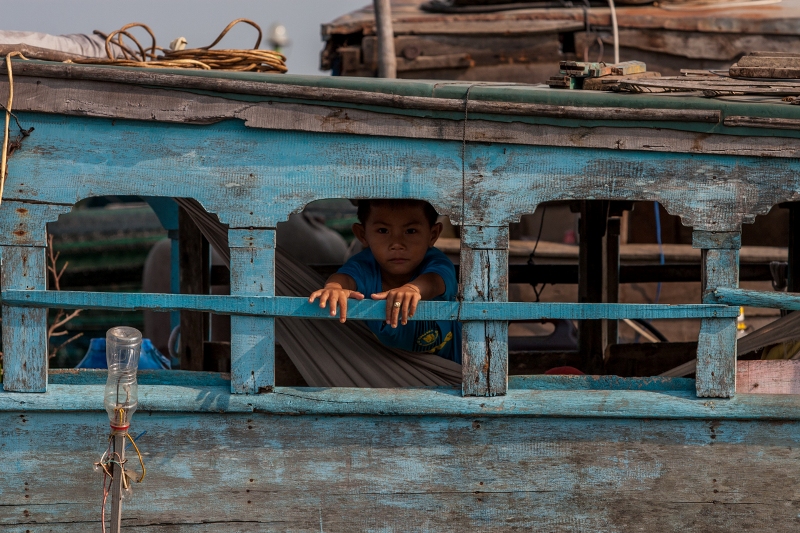 And it would’ve been easy to miss this little guy peeking out from inside the boat.

Capture images that tell a story

The perfect image tells a story. Or at least leaves the viewer wanting to know more. It’s certainly a challenge to encapsulate an entire story in a single frame, going beyond the obvious. Most times, it’s the result of equal parts luck and experience. But there are definitely things that a photographer can do to recognize the factors that go into a great storytelling image.

One factor is contrast. 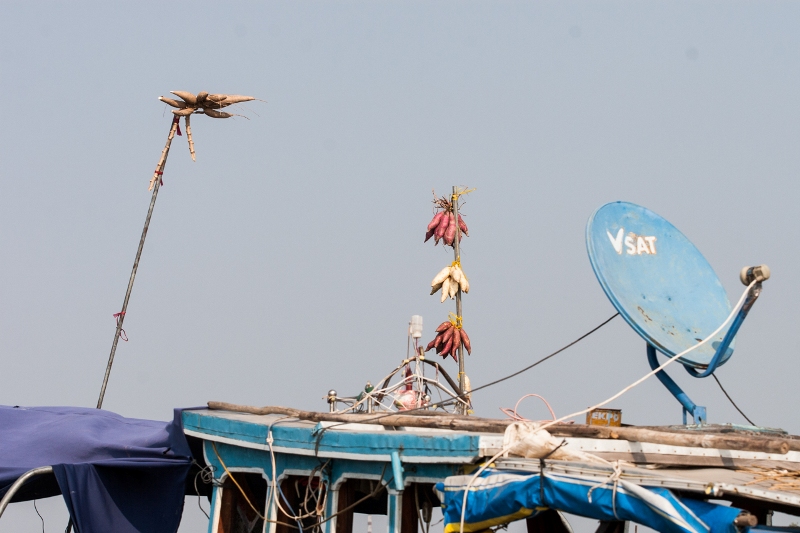 In this image, it’s the three tall objects that break up the sky. Two tell the story of the market where vendors mount their produce for all to see. The satellite dish makes for an interesting contrast because it’s unexpected for a boat. 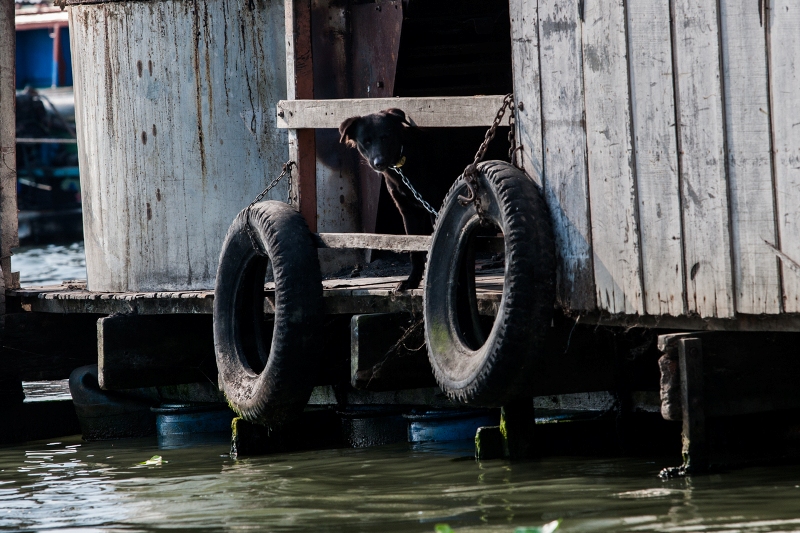 In this image, it’s the conceptual contrast of the boats featuring elements of domestic life we’d associate more with houses than boats, like pets… 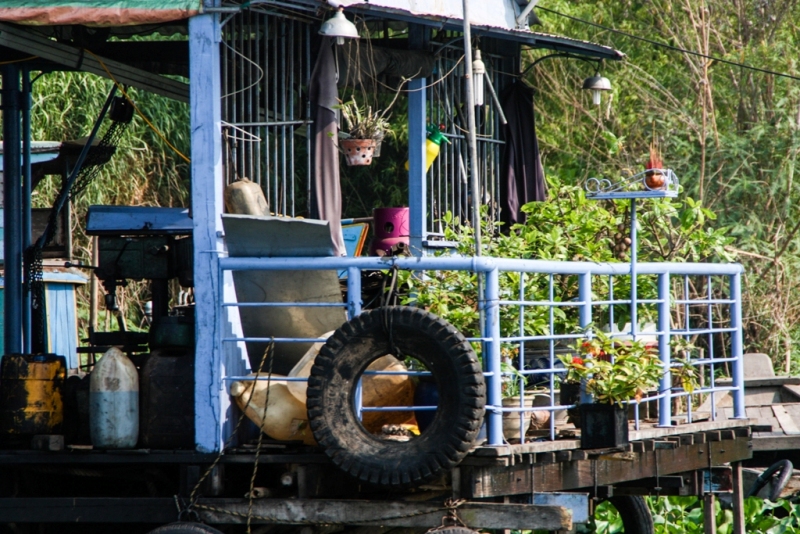 or full gardens which bring in a touch of home. 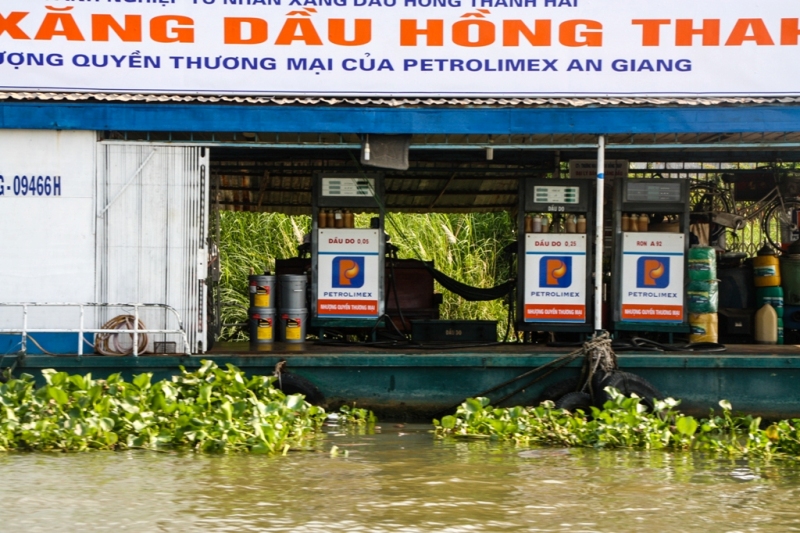 This floating gas station is a bit of a surprise and tricks the eye for a split second. 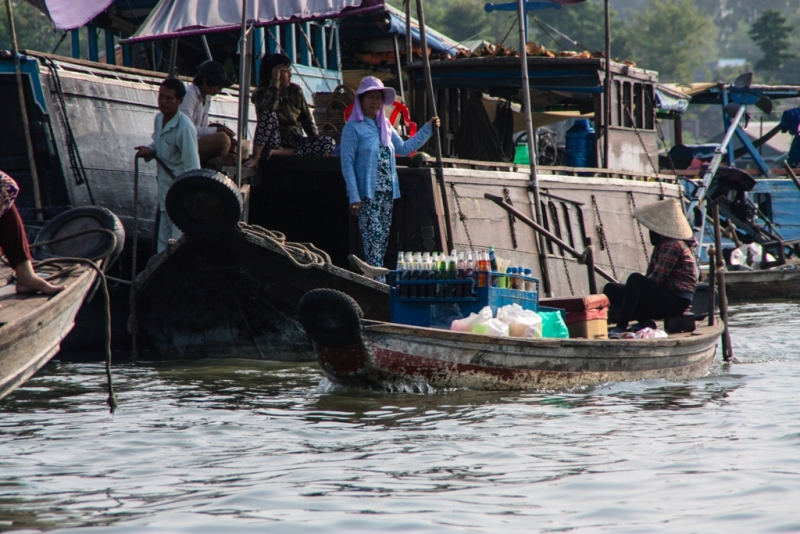 While the background in this image is a bit busy, the contrast here is between the big boats and the one small boat ferrying refreshments. It takes a few seconds to realize what the small boat is carrying, but it does make for an interesting shot. 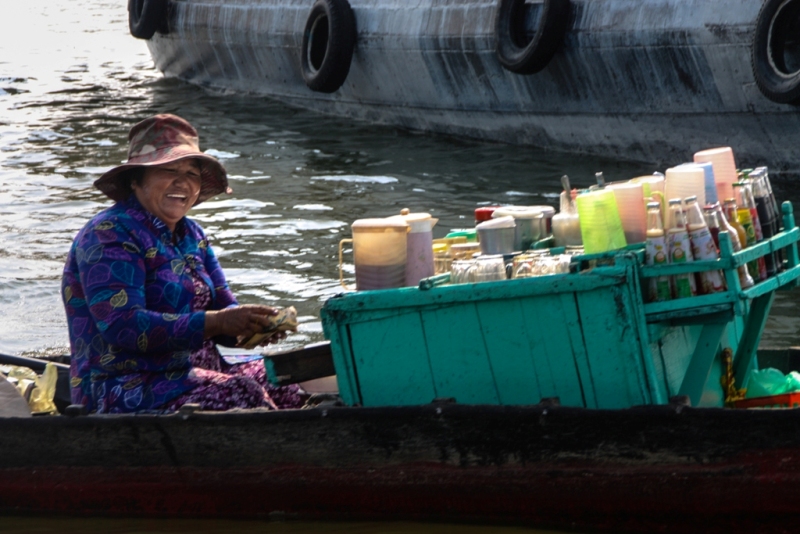 Here, the visual contrast is stronger, with the vendor being the main subject and her wares being easier to see against the largely colorless background.

Another way to tell a story is through motion. 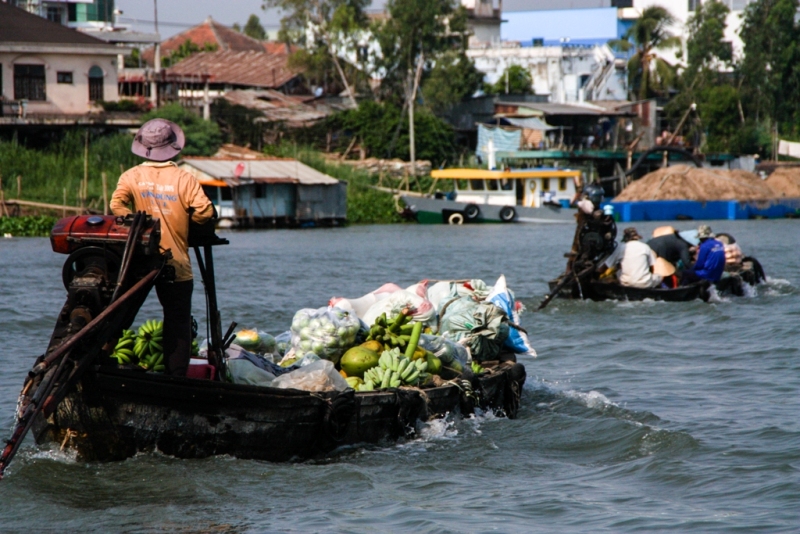 This image captures two boats leaving the market, laden down with the day’s produce. I like that they’re both headed off in the same direction. The fact that the larger, closer boat is tucked away in the left corner, leaving a bit of space in front of it, encourages the eye to move from left to right all the way across the image. That little bit of space, along with the small waves produced by the boat, is interpreted by the brain as forward movement. It would’ve been a very different image had the boat taken up the whole space.

The Chau Doc Floating Market is an amazing place to practice your photography because there’s so much happening, so many stories to tell. You’ll really need to train your photographer’s eye to see the story behind the images, zooming in to focus on the details and to capture the moment.

Do you have any other photography tips for the floating market? Please share them in the comments section.

The Victoria Chau Doc Hotel offers a river tour that includes visiting the Chau Doc Floating Market as well as a floating fish farm and other river-based sights. River excursions can be booked at the tour desk at Victoria Chau Doc or by emailing: [email protected] The Temples Of Nui Sam 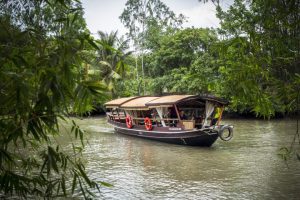 Getting Off The Beaten Track In Vietnam

Noodle Making In The Mekong Delta

[…] Part 2 where we use the Chau Doc Floating Market as a background to talk about shutter speeds, looking for […]

[…] long poles for everyone to see. With so much activity, it’s the perfect place to practice our photography skills, and we notice that all the boats have “eyes”, a distinctive feature of Vietnamese vessels, […]

[…] poles for everyone to see. With so much activity, it’s the perfect place to practice our photography skills, and we notice that all the boats have “eyes”, a distinctive feature of Vietnamese vessels, […] 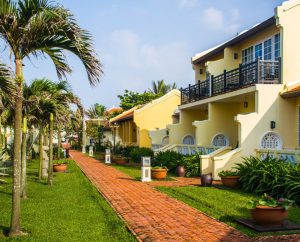 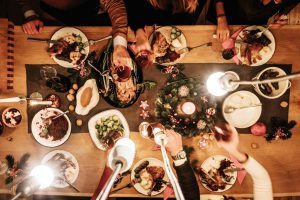 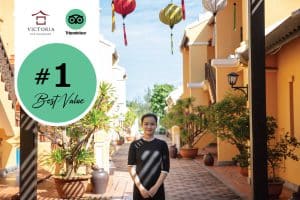 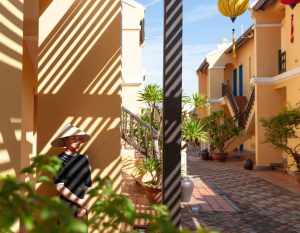 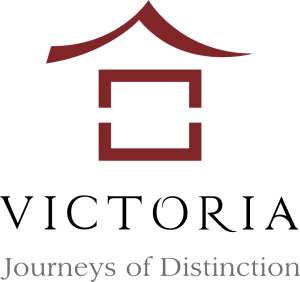